Can pheromones make a man more attractive? If we date back to our prehistoric ancestors, one of the likely ways that they would have chosen a partner, would have been through smell. Our basic human nature allows us to determine whether we like something based on how it makes us feel when we inhale its scent. Taking a whiff of your favourite food isn’t that dissimilar to inhaling the scent of a potential sexual partner.

This is where pheromones come in to play.  These sexy signals that stimulate the sinuses can make or break your chances of getting your ideal woman. But it’s nothing to do with any product that you put on your body. Our natural pheromones make us more attractive to some people than others. In this article we are going to explore exactly how and why this is.

VISIT THE NATURAL HEALTH SOURCE MENS HEALTH STORE … GET 25% OFF

In a nutshell, pheromones are sex hormones which give off a particular scent. They are different in each of us. What is even more interesting is that these hormones have been observed at work in species from beetles to bears and hedgehogs to humans.

What’s a little more gross is that these pheromones are usually detected in bodily fluids such as our pee and sweat. But these, often sniffed at substances, may be what are responsible for attracting your dream partner. It’s not uncommon to see animals sniffing an area where another has urinated and there must be a reason for this.

When a women is exposed to the pheromone scent of a male, she will react in a physical manner. It has been seen that pheromones can cause an increase in the heart rate and alter the body temperature. They also cause alterations in the breathing rate. These are physical signals that the woman is attracted to the man. These physical signals can change the behaviour of the woman and can create feelings of sexual arousal. 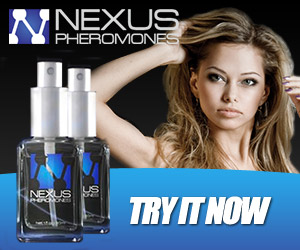 We’ve all heard of testosterone, the male hormone that is responsible for everything from balls to body hair. Androsterone is a lesser mentioned hormone and what we can thank for making us sexually attractive to the fairer sex. Or at least for some of us!!!

It has been noted in scientific studies that androsterone is only secreted by as little as 10% of men. It’s these who are the ones that women seem to find the most attractive. Most notably, this 10% of men aren’t even necessarily the most typically handsome. Instead, their high levels of androsterone seem to have a positive effect when it comes to attracting women.

Deodorant and aftershave companies will have you believe that their scent is the one to use if you want to attract as many women as possible. In reality, what you spray all over yourself may have little to no effect over your natural hormones. That being said, how attractive a man is to a woman will highly depend on how receptive she is.

It’s Sexual Chemistry In A Bottle!

There have been many studies which show that women are more receptive to the hormones in a males sweat around the time that they are in ovulation. This likely has something to do with the prehistoric need to mate at this crucial time of the month. However, there are even more factors which play a part in how your pheromones may or may not attract a woman.

As we age, many aspects of our biological make up begin to fade and become less functional compared to what they once were. Your pheromones are no exception to this rule.

It has been observed that past the age of 40 your pheromone production will begin to slow down. This can make men feel less sexually desirable. However, it has also been seen that by simply using a pheromone based spray, men over this age can feel more confident once again. But do these sprays work in attracting the opposite sex?

Can I Make My Pheromones Go Further?

Those who produce more attractive pheromones are likely to have many more sexual encounters with women. So it is no secret that men would want to raise their pheromone levels in order to become more attractive.

This may be achieved through the use of a pheromone spray. Some scientists have performed studies on men using such products. In some instances, men were seen to be up to 40% more successful in engaging a woman and keeping her attention over times when they were not using a pheromone product.

If a pheromone product isn’t up your street, there are natural ways in which to increase your pheromone output. This could include ensuring a frequent exercise regime and taking supplements.

Other Benefits Of Pheromones

Whilst attracting women is great, there are other advantages to a healthy pheromone output. For example, those who have a higher level of pheromones may notice better mental health, especially for conditions such as anxiety and depression. This may also couple with more easily attracting women due to raised levels of confidence.

As we mentioned, increased levels of pheromones usually equates to a more healthy sex life. At present there are tests being done to see if a supplement may help for those whose sex life has become less frequent than they would like.

Human babies use pheromones to detect where their mothers breast milk is. In the animal kingdom they may be used to signal an alarm or show other animals from the group where food is.

It’s Sexual Chemistry In A Bottle!

So … Can Pheromones Make A Man More Attractive?

In short, pheromones can make a man more attractive to the opposite sex. However, this is conditional. It depends on the person, the levels of pheromones and the recipient.

One of the natural functions of pheromones is to attract a mate but many human males do not give off as high a level as others. This means that some men are naturally more attractive than others.

With that in mind, there are ways that you can increase your natural pheromone production. Eaier still – try using a pheromone spray.

Be A Better You